Daphne Freise launched her career as an international flight attendant in 1994 and has indulged the passion for world religions and cultures that was ignited by the globe she received for Christmas when she was 8 years old. Soon after that, her great-grandfather built a custom bookcase for a new complete Encyclopedia Britannica set and her mother serendipitously chose a vacant wall in Daphne’s little blue Holly Hobbie bedroom as its home. What ensued were hours of camping on the blue and green shag carpeting lost in her own tiny big world. While LPs of Glen Campbell and Olivia Newton John spun on the Donny and Marie record player, so spun the globe. She closed her eyes and rested one fingertip to skim on its surface until it came to a stop on a far  away continent, found the volume in which that place was written about, and pulled the weighty book to the floor to devour its wonder.

Aviation has taken her around the world hundreds of times over the past 20+ years including temporary duty assignments in India, Saudi Arabia, and Malaysia. These days she is in the corporate aviation sector and lives in Pennsylvania with her husband and two cats, Sophie and Copper, and is a wannabe hippie and ABBA devotee. 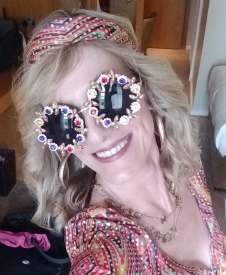 Daphne D. Freise, 2020© All material (including photographs and other images) on Onceastewardess.com is the sole property of author and may not be copied or republished without written consent or credit.